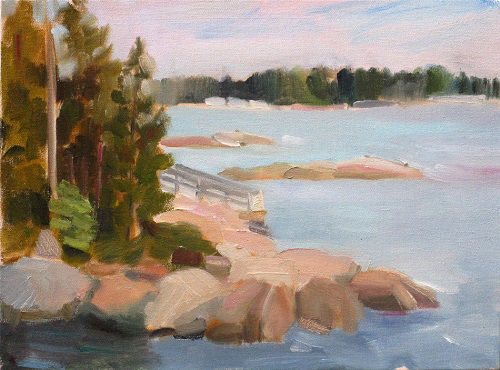 Diane Drescher’s light filled landscapes straddle the line between traditional and modern. She graduated from the University of Wisconsin-Madison and continued her art training at The School of the Art Institute of Chicago, the Art Student’s League of New York, and the National Academy. Travels to Europe over a 10-year period to research design trends for fashion projects provided an ideal opportunity to study the tradition of landscape painting in the museums of Paris and London. As a result, Drescher began refining her painting style using vivid colors, thick application of paint, and distinctive brushstrokes.

Drescher is a member of Bowery Gallery and has mounted two solo shows since joining in 2009. Her third show will be in Oct. 2018. She has shown her work in solo and group shows in New York City as well as venues in Woodstock, NY and Rockland County where she maintained art studios for many years. Drescher was included in the Westbeth gallery group show, “City as Subject” curated by Xico Greewald in 2014. In 2017 – 2018 one of her painting images was featured in the subway as a poster under the auspices of the Artist Unite/ MTA initiative.

Drescher resides in New York city and has found inspiration for her recent paintings in the urban landscape, specifically the High Line and the Over-passes of the Henry Hudson Parkway. Her other subjects include seascapes painted on the coast of Rhode Island, Maine, and Cape Cod, and most recently desert scenes of New Mexico.